Codemasters® confirmed that DiRT Rally 2.0™ Seasons Three and Four will launch from 27 August. Season Three returns to its rally roots with fan-favourite locations Finland and Greece complemented with brand new vehicles including the Peugeot 206 Rally and Volkswagen Golf Kitcar. Players also receive the latest of the 2019 FIA World Rallycross Championship season updates with Abu Dhabi’s Yas Marina Circuit. As with previous Seasons, players will receive a mix of locations, cars and liveries. 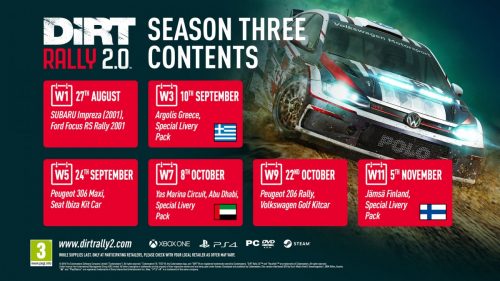 DiRT Rally 2.0’s Season Three content will be released as per the following schedule:

Season Three combines a mix of Rally and Rallycross (RX) content with the much-loved SUBARU Impreza (2001) and Ford Focus RS Rally 2001 and Rally locations Greece and Finland, all returning from the original DiRT Rally. Week Seven sees the latest of the new RX locations with Yas Marina Circuit, a mix of asphalt and loose surface sections located in the stadium sector of the Abu Dhabi venue. Yas Marina Circuit’s Rallycross layout was introduced as the opening round of the 2019 FIA World Rallycross Championship and is making its videogame debut in DiRT Rally 2.0. Players will also receive F2 Kit Car favourites with the introduction of the Peugeot 306 Maxi and Seat Ibiza Kit Car. 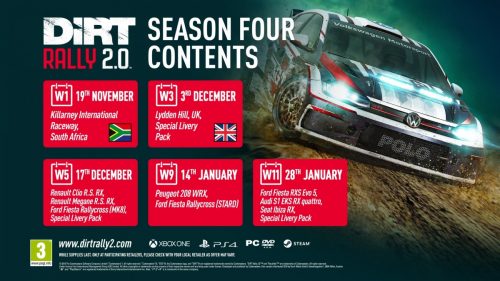 Season Four of DiRT Rally 2.0 launches November 19 as per the following schedule:

“It’s been six months since we launched DiRT Rally 2.0 and the response from our community has been really positive,” said Ross Gowing, DiRT Rally 2.0 Game Director at Codemasters. “We spend a lot of time listening to our players and we’re delighted to bring them remastered classics alongside new vehicles and locations to give them a completely new experience.

Seasons Three and Four are a perfect blend of classic and new with the likes of Greece and Finland which were established on the original DiRT Rally, through to new RX circuits in Abu Dhabi and South Africa. There is so much variety that will appeal to old and new players alike. We’re also delighted to update the FIA World Rallycross Championship with new 2019 vehicles as well as bodywork and livery updates.”

Players will have the opportunity to purchase Seasons Three and Four and each piece of content separately on their digital store of choice.

DiRT Rally 2.0 is available on the PlayStation®4 computer entertainment system, the Xbox One family of devices and Windows PC (DVD and via Steam).