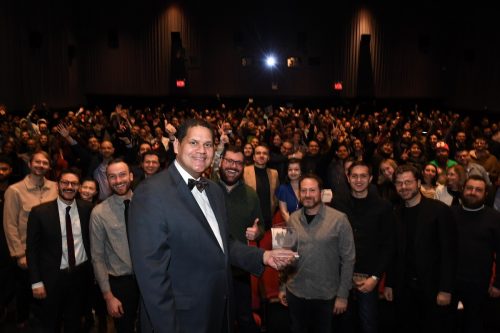 Highlights of the ceremony included the presentation of the Andrew Yoon Legend Award to industry great Reggie Fils-Aimé, who playfully took a selfie with the audience last night. He helped change the gaming world with the Wii, Nintendo DS and Nintendo Switch. The Legend Award recognizes individuals and organizations that exhibit a significant, sustained body of work that shows exceptional achievement and innovation. Past recipients include Jade Raymond, Richard Garriott, Todd Howard, Rockstar Games and Ralph Baer.

When asked about the New York Game Awards in its 9th year, Critics Circle president and founder Harold Goldberg said, “what a great night celebrating the best in video gaming with industry greats that I admire for their commitment to the gaming industry. With a full house and hundreds of thousands of gaming fans watching our livestream, 2020 was our biggest awards show yet, but stay tuned later this year when we announce the 10th Annual New York Videogame Awards for 2021!”

Based in New York City, the New York Videogame Critics Circle is a not-for-profit organization, stemming from the need for community in the often-cut-throat world of journalism. This multicultural group is comprised of the finest videogame critics, designers, writers, reporters, bloggers and videographers in New York City. Members of the New York Videogame Critics Circle give back to their communities with programs like at DreamYard Prep School in the Bronx, NY where the group offers mentoring, internships, lectures, job information and college scholarships for intelligent, but underserved students. The organization also holds community events, mentoring and classes in partnership with the Henry Street Settlement. At SVA Theatre, the group holds the annual New York Game Awards, which benefits their community service work. They also mentor seniors at O.A.T.S., Older Adult Technology Services at their tech center in NYC. The New York Game Awards Scholarship and Mentoring donors include Sony, Wizards of the Coast, HyperX, Samsung, MSK, and Ubisoft, with more to be announced.