Grab your gear, the adventure is about to get even more exciting. Pearl Abyss announced that the world of Black Desert Online just got a little more dangerous. The four new Field Bosses will prove a challenge to even the most seasoned veterans.

Successfully take down any of the four Field Bosses for a chance to acquire some of the best armor the game has to offer. Face off against Red Nose, Dastard Bheg, Giant Mudster, and Dim Tree Spirit in specific locations on the map. They will only spawn at certain times so make sure to catch them when you can. Each of the field bosses can drop a Boss Defense Gear Box which gives special equipment like Dim Tree Spirit’s Armor or Bheg’s Gloves. This is a boss encounter that Adventurers definitely will not want to miss out on. 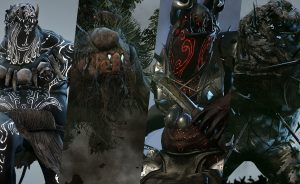 Pearl Abyss has also announced the arrival of the long-awaited Patrigio Night Vendor. Now Adventurers can spend 50 energy to take a “roll” to see which rare item he will offer. Remember that the Night Vendor operates in the shadows, and will only show up in the dead of night.

Furthermore, cool off from the heat at Mysterious Lake Ellie. In celebration of the Mysterious Lake Ellie Festival, Adventurers can complete a variety of quests for special rewards like popping water balloons and so much more! For more information about the festival and other ongoing events, check out the website.

Black Desert Online’s stunning graphics have many users curious about the system requirements for the game. Pearl Abyss optimized it so the minimum required specifications can be suitable for a greater number of users in Southeast Asia. Check the system requirements for the game here. This optimization allows more users to enjoy Black Desert Online!

Black Desert Online is an open world action MMORPG with cutting edge visuals and skill-based combat that redefines we see the genre. Black Desert Online has the most fully developed character customization system of any game that is currently on the market. This feature allows users to break out of the norm and make unique characters that truly represent each and every player. Its intuitive controls, beautifully designed world and extensive lore will excite both newcomers and veterans of MMO games and action RPGs in general. The game has been successfully launched in over 150 countries, is available in 12 languages and has over 8.5 million registered users. The mobile and console version are scheduled to launch globally in 2018.

For more information about Black Desert Online, go to https://www.sea.playblackdesert.com/