Lacking mental focus in your daily life? Maybe the best medicine is to try your hand at two mind-bending puzzle games – Ichidant-R and Columns II, now available as part of the SEGA AGES line-up for the Nintendo Switch!

Neither of these titles have ever been released in the West, so this is a fantastic opportunity for many of you to try out them out for the very first time either locally or online. Whether you’re battling your friends in incredibly bizarre mini-games with Ichidant-R, or find yourself gripping the Joy-Con like a vice while playing the Infinite Jewel mode in Columns II, there’s plenty of amazing value here to indulge in! 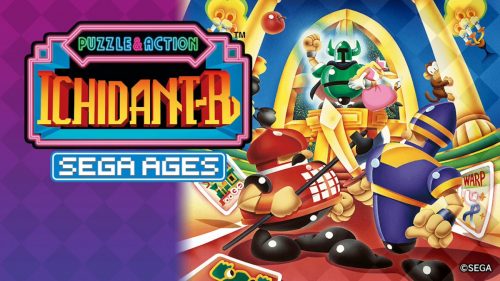 Originally released for Japanese arcades back in 1994, this unique spin-off from Bonanza Bros. features a compilation of wacky mini-games that require sharp thinking and quick reflexes, all set in a fantasy medieval backdrop where you must save a princess from the Demon King. Experience “puzzle and action” in this definitive party game.

Match jewels, fossils, and disks as you take a voyage through time in the second installment of this fun and exciting puzzle series. Control the falling pieces and aim for three-in-a-row in any direction to clear the screen before they stack to the top. Switch between multiple game modes, like “Flash Columns” where you target flashing jewels and unlock secret Jewel Case characters, or “Versus Columns” that pits friends against one another.

Ichidant-R and Columns 2 are available individually on the Nintendo Switch eShop in the Americas and Europe for 10.95 AUD, 6.99 EUR, 5.99 GBP.