It is still not late to celebrate the grand launch of upcoming Black Desert Mobile. Adventurers can participate in the special event to allow themselves to experience Black Desert SEA for free while waiting for the mobile version to be globally released later this year. In the meantime, Adventurers can also check out additional events running this week where they can get more items and rewards. 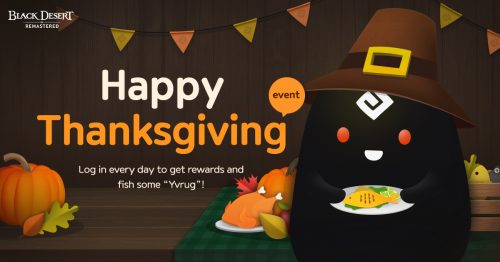 The Fishing Festival is back after a long time! While playing Black Desert SEA for free, Adventurers can go fishing in various locations and get exclusive items. Those who fish in Velia, Heidel, Altinova, Valencia, Grána, and Duvencrune will have a higher chance of getting Yvrugs until November 27. The event will be the perfect opportunity for Adventurers to earn silver as the Yvrugs can be sold to an NPC vendor for 500,000 silver each.

Black Desert is Pearl Abyss’ open-world action MMORPG with cutting-edge visuals and skill-based combat that redefines the genre. With the most developed character customization system of any game currently on the market, users can break out of the norm and make unique characters that truly represent themselves. Its intuitive controls, beautifully designed world, and extensive lore will excite both newcomers and veterans of MMO games and action RPGs.